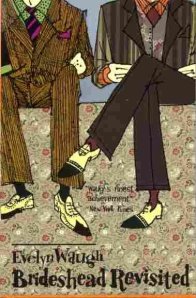 Our initial reactions to the book:

Timmy and Sam found it long-winded, beating around the bush, although Suffian and Aaron defended the winding style to mirror the plot of returning to Catholicism.  Strangely, Har felt the opposite of Timmy and Sam, calling the novel the Twilight of its time.

Suffian pointed out the autobiographical nature of the book while Gabriel lamented on the practicality of book sales.

1. Catholicism: Lydia questioned if the book is pro-religion since everyone suffers under it, but Aaron cited the positive ending as pro-religion. We talked about the significance of the name Brideshead and linked it to John Donne’s “Batter my heart, three-person’d God,” which is often analyzed as the narrator being a bride of God. “God’s Bride” can also be the Church itself. Whichever the case, it is clear that Brideshead is a symbol of Catholicism, and eventually, the occupants return to the house, ie, Catholicism.

Everyone was bored by religious talk–Gabriel said “religion” is a word so often used it loses its meaning–so we moved on.

2. Men Desiring Men: Gabriel cautioned us on ahistoricity and said that the characters cannot be considered “gay” as it is a neologism. The characters should be known as men-desiring-men. And all men who desire men in the novel have to suppress their desires or face dire consequences. Lydia and Tim brought up the child-like nature of Sebastian, whose teddy bear is both a longing for his sexless childhood and a chastity ring for his budding desire for men. Suffian noted that the sexlessness in the novel paralleled Waugh’s own life when he was in the Oxford’s “Hypocrites”.

We also talked about Catholic guilt being sublimated in various ways, such as alcoholism, and post-coital cigarettes: you use one sin to substitute the other.

Besides Sebastian, Lord Marchmain‘s desire causes him to be a pariah among his children and people; Anthony Blanche is portrayed negatively as a “queeny gay” (Timmy’s words); and, Aaron argued, even Charles has to transfer his love for Sebastian onto Julia, settling for a substitute. 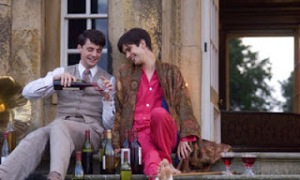 1. Timmy’s favorite character is Cara for her insightfulness and willingness to accept Lord Marchmain for who he is. Timmy cited extensively on Cara’s thoughts on homosexual love:

“It is a kind of love that comes to children before they its meaning. In England it comes when you are almost men; I think I like that. It is better to have that kind of love for another boy than for a girl… When people hate with all that energy, it is something in themselves they are hating. Alex is hating all the illusions of boyhood–innocence, God, hope.” (pp. 102-3)

2. We all had a soft spot for Sebastian whose struggles gay people can identify with. Timmy thought Alexius is rather like Sebastian.

3. Lydia read against the grain, liking Anthony Blanche, who dares to live his life, but Timmy hated the one-dimensional depiction. Lydia both despised and empathized with the Julia-Charles relationship.

4. Lady Marchmain is an enigmatic character, manipulative but, according to Lydia, this is how Lady M is brought up and how she shows her love.

5. Rex isn’t a complete being because, Lydia and Har claimed, that there is some form of xenophobia at work, and because Rex is nouveau riche, his pursuits are with money, not his life.

Both Gabriel and Suffian liked all characters, as Suffian reminded us that even though the characters are flawed, all of them are very realistic.

Sam and Har didn’t change their minds about the novel after the discussion. Aaron said there are some hilarious parts in the books (Charles and his father; and the dinner scene onboard with Julia). Timmy and Aaron felt the book was beautifully written. This is Aaron’s favorite passage when Charles’s cousin chides him for hanging out with “Anglo-Catholics, who are all sodomites” and Charles defends himself:

“I like this bad set and I like getting drunk at luncheon”; that was enough then. Is more needed more?

Looking back, now, after twenty years, there is little I would have left undone or done otherwise… I could tell my cousin that all the wickedness of that time was like the spirit they mix with the pure grape of the Douro, heady stuff full of dark ingredients; it at once enriched and retarded the whole process of adolescence as the spirit checks the fermentation of the wine, renders it undrinkable, so that it must lie in the dark, year in, year out, until it is brought up at last fit for the table. (p. 45)

Lydia chimed, “So it basically means what doesn’t kill you makes you stronger, right?”

What did we dislike about the book? Everything about it.

Javin found the entire book “distracting” – from its style, to the proses and the subplots. The excessive subplots and red herrings also irked Timmy. Jiaqi thought the ending was too rushed and suggested that the book would have been more interesting if it talked of the motivation for the murder. Aaron deemed the book homophobic.

Jiaqi felt that homosexuality and homosexuals were not dealt deeply with in the book, though he praised its fairly realistic portrayal. Javin found it erratic and the homosexuals were not painted in the most positive light. Aaron added on that no characters in the book were comfortable with homosexuals. Glenn opined that this may be a depiction of the author through the niece.

Conclusively, Jiaqi commented that the book was not written to portray understanding of the LGBT community.

Women were also not favourably portrayed; Aaron questioned whether this was done intentionally or otherwise. Jiaqi noted that there were zero positive relationships between women. Aaron found the relationship between Kay and Lucy to be “encouraging”, though later intuited the two as Cornwell’s personas (the Republican and the lesbian).

We briefly discussed the bathroom scene which included Chanel, which Alexius deemed as a “brand endorser.” Jiaqi found it to be a sympathetic scene, whereas Aaron quipped that even though Kay solves crimes, she still has to remain feminine and an elitist, i.e. maintain that “class factor.”

The topic of food was also touched on; according to Aaron, it appeared a lot throughout the book. “Why so specific?” he asked. Alexius joked that Cornwell was trying to be the next Martha Stewart. Javin viewed it as another way of conveying the “atas-ness” of the book and its lead character/s.

Aaron brought up the quote (“It seems this is all about people loving people who don’t love them back”), which he found poignant and stuck a chord with him. Both Glenn and him perceived it as describing of unrequited love.

Timmy questioned the inclusion of Psalm 107 (“They that go down to the sea in ships, that do business in great waters; these see the works of the Lord, and his wonders in the deep”) and its significance. Everyone agreed that it is about looking beyond the surface.

Glenn picked Lucy the niece as his favourite character as she seemed the most realistic out of everyone. Kay was Jiaqi and Timmy’s favourite for being a nice, complex human and a strong female. Both Javin and Aaron had no favourites, though the latter shared his favourite quote (as previously mentioned).

Overall, we enjoyed the book: it had a nice story for its time (Javin); it was an entertaining page turner with a strong female lead, which was rare (Jiaqi); and it had good pacing, with something coming up at every chapter (Chason). Despite its “backwards”, conservative mindset, Aaron found it likable. Timmy quipped that the book felt like an episode of CSI – “the Las Vegas version, not the Miami one.”

The only opposing view was from Alexius, who had DNR stamped all over the book and thus, paid more attention to his phone and apps rather than to the discussion.