41st Discussion: Ali Smith’s There But For The

This week’s discussion was held at The Pigeon Hole as Raj was admitted into hospital with stomach ulcer (Get well soon!). Thank you to new attendees Andrew and Muslim for joining us this month.

We kicked off the discussion asking everyone’s thoughts on the book. Amit and Har are still reading the book. Amit found the book strange yet interesting, as well as very mysterious as it focuses more on the other characters. Har is appreciative of the novel’s suspense, and found the book anecdotal. Both Isaac and Andrew – the number 1 Ali Smith fanboys – liked the book too. Isaac enjoyed the witticisms and the puns. Both Timmy and Nicole thought the book is funny.

Alexius, however, didn’t particularly like it, feeling that the book was too tedious to be read and was not interesting.

“What does it mean? Why did the author decided to name the book as such?” asked Aaron.

According to Andrew, Ali just decided to name it like that because she “quite liked the phrase.”  He went on: “It doesn’t mean much, but (it) can mean things for other people.” The rest of us just nodded our heads as we didn’t know what else to make of it.

Isaac viewed the prologue as a modern fable, concerning youth and the passing of youth. He further elaborated that the man confronting his younger self might even be Miles himself. Alexius felt that this part caught his attention. He thought that the relationship between the boy and the man was never stated, and speculated that it could be alluding to paedophilia.

“What’s the point of including them?” Aaron asked.

Alexius felt that the story itself did not hold much context, hence the short stories were add ons to beef up the book. Nicole, meanwhile, thought that the stories contributed to the characterizations. Aaron viewed them as reflections of art, and alluded to Miles’ quote to Brooke. Alexius referenced Jackson Pollock.

Har thought the entire scene was banal, though Timmy felt otherwise. He thought that the entire chapter perfectly captured the mood of the party very well, which Andrew agreed with.

We pondered on whether it is better to be cleverest, or cleverist. Aaron felt that the book did not achieve that.

Amit liked Mark because we are able to glimpse into his thoughts. Aaron described him as hot, although Timmy begged to differ.

Miles was the hot favourite for this discussion, being liked by Isaac, Har, Nicole and Andrew. Brooke followed in second, with votes from Aaron, Andrew and Timmy. They found her precocious and lovable.

Alexius liked the boy in the prologue, describing him as “significant”.

Har started disliking Miles after he locks himself in the room.

Alexius cited the man in the prologue as his least favourite.

Isaac described the book as an anti-novel, almost like giving the middle finger as to how a novel should be written. Har intends to finish reading it, as he appreciates the writing style. Andrew remains as Ali Smith’s fanboy and described the book as a biting social critique of the harsh celebrity life. Nicole said she will have to read till the end; she does, however, like the characters and the tricks Smith employed throughout her novel.

At the other end of the spectrum… Amit remains indifferent to the book. Alexius, however, still finds it boring post-discussing the book, declaring it as too “textbook” and stylistic. He doesn’t plan on continuing reading it. Ernest too didn’t like the book, finding the wordplay too hard to comprehend, and the overall style as being too chunky and dry.

Aaron declared the interactions between Miles and Brooke to be magical, though in closing the discussion, he felt that overall it wasn’t a fruitful one. “The novel is indubitably technically brilliant but it either went over our heads and we couldn’t understand it, or it’s just meaningless that we cannot extract meaning out of it.” Oh dear. 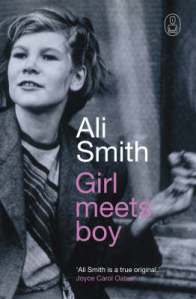 1. Timmy and Aaron liked the novel very much, but not Isaac as he has read Smith’s other work. The discussion went on as Isaac eyed a handsome man in striped shirt and pants while Timmy liked a boy in white tee. Aaron, seated between Timmy and Isaac, was at a vantage point and could see both the man and the boy but could not decide whom he liked better, proving and disproving two theories at once: men cannot multi-task and Aaron is a slut.

2. Characters: Timmy noted that the characters are not clearly described, to which Aaron argued that since Smith’s purpose is to write a myth, the characters are written in a generic and archetypal manner, instead of being specific.

Timmy’s and Aaron’s favorite is Imogen–who is named after a heroine in Cymbeline which, shamefully, none of us has read it–because she is tragic, realistic, human all too human while Isaac voted for the idealistic and dreamy Anthea Gunn, the blooming flower in war.

All disliked Dominic, Norman and Keith although the novel directs readers to hate Dominic and Norman more because of their homophobia. Keith, being the boss, is willing to sellout to homos, which is the reason why Aaron thought Keith is more detestable for his ambition of world domination. Timmy thinks that the villains don’t seem real but Aaron has many ex-friends like that. Obviously, Aaron was hanging out with the wrong crowd.

However, all agreed that we don’t really hate Dominic, Norman and Keith as Smith is very sympathetic to her characters; she does not demonize them, allowing no space for readers to hate the villains, which is the moral of the story: “SPREAD THE LOVE.” Isaac commented that the reason Smith writes is to make the world a better place and Aaron said “That’s not a bad reason at all.”

a. Isaac remarked on the similarity of styles between Jeanette Winterson and Ali Smith. Aaron cautioned that this style could either be poetic or sound like an emo 14-year-old. Fortunately, Smith falls on the better side of the equation.

b. The narration is equally stunning. For instance, the opening sentence: Let me tell you about when I was a girl, my grandfather says.

c. Timmy observed that the brackets used in Imogen’s narration represent her inner thoughts. Issac pointed a significant passage in which Imogen decides to voice out her thoughts (so the words are repeated, first in brackets then without) and Imogen’s partner, Paul, says she says it too quietly. For Anthea’s narration, a story is said twice, first in an imaginative way then in a more realistic way. This repetition is important.

d. Repetition: not only are Anthea’s stories repeated, like myths are passed down from generation to generation, Timmy noted the cyclic nature of the narrative: starts with Granddad and ends with him. Anthea mirrors her granddad in vandalizing to advance women’s rights; Imogen, the Burning Lily in their anorexia. Timmy sees the repetition as hopeful; as events are repeated, improvements are made.

a. Words/ Repetition/ Myth: Aaron believed that the repetition is closely linked to the attention Smith pays to words. (The author brings up several times the importance and power of words.) The first narrative, Aaron argued, is usually mythic, fairy-tale-like and imaginative, showing how words have the power to bring things into being; this is closely connected to performativity notions of Judith Butler whom Smith quotes as an epigraph. Words, as the granddad in the story says, give us hope, make myths, cause changes. Isaac very shrewdly pointed out that while there are good myths, there are bad myths too: the advertising, represented in the novel, is a form of bad myth-making, made to deceive.

b. Time: Events which happen in the past are narrated in present tense, while present event in past tense, demonstrating not only the cyclic nature of time but also the mythic eternal.

c. Water: Aaron berated himself for not seeing the metaphoric possibility of “water,” the product that Pure Corporation, the company in the novel, is selling until he read the acknowledgement page, saying that “water is bent.” Aaron saw water as a metaphor for its fluidity like the myth of Iphsis. Also, he said this very smugly, “water traps and frees Imogen: trapped because she works for the company, frees because of a symbolic action when she is given a glass of water by Robin, Anthea’s partner.” In this sense, water takes on a connotation of baptism. Isaac added that the importance of the scene when the Corporation is thinking of advertising slogans: the executives could not give a coherent marketing, depicting how volatile water is, and how difficult it is to pin water down. In the wise words of Isaac: “Water is water.” This difficulty to pin down water, this ability to live with the ineffable, is crucial because it is the point of the story.

d. Love – Jaded Aaron nitpicked, complaining that the love depicted in the novel is too miraculous, not realistic, transforming Imogen so suddenly. Isaac claimed that the novel is about love and hope, about making the world a better place, so even if it seems forced, there is a point. Or in Isaac’s words: “But isn’t love transformative?” Aaron suspected that Isaac was masking his quixotism behind the sardonic tone.

Lastly, we all drank Starbucks, something Smith may not approve.