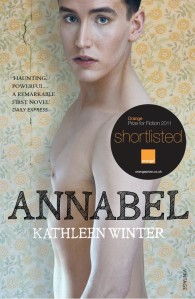 Special thanks to Raj for organizing a Christmas party for this discussion.

It seemed that everyone, except Aaron and Amit, disliked the book: it’s depressing (Alexius), too slow in the latter half (Timmy), grating style (Raj), and forgettable one-dimensional characters (Amit). Har didn’t read it because he disliked the cover. Javin, Luke, Ben and Gil lent their moral support.

(a) mother: Raj claimed Jacinta wants to raise Wayne as a girl, not a boy. Timmy agreed, saying that’s why Jacinta encouraged Wayne’s interest in synchronized swimming. Aaron, on the other, believed that Jacinta would raise Wayne as s/he is, as an intersex.

(c) Thomasina: Both Raj and Timmy thought that Thomasina loves and understands Wayne. But Alexius pointed that that she is using Wayne as a substitution for her dead daugther. Aaron saw her as the villain of the novel because she makes use of Wayne to cope with her grief selfishly, and makes very bad decisions.

2. Marriages: Amit observed the only happy married couple is Thomasina and Graham, and that’s because, Timmy said, Graham is blind. Aaron opined that since blindness is a classic Freudian symbol of castration, then it seems that a happy marriage is between a woman and emasculated man.

3. Sexuality: Although the portrayal of Mr Henry seems homophobic, the ambiguity of Wayne’s sexuality gives the book an inconclusive stance on homosexuality. However, Amit averred that the author seems to skew Wayne to his female self, and to like women.

1. Peeling: Alexius read the peeling of skin as a sign of his puberty but Timmy saw it as a metaphoric rebirth.

2. Bridges: Alexius said it was the bridging of Wayne’s genitals to cause his pregnancy; Raj saw it as a bridging of both feminine and masculine traits.

Timmy’s and Raj’s favorite is Thomasina because she is a strong, independent woman who keeps it real. Alexius liked Steve. Following in Alexius’s footsteps, Amit liked a minor character, the kind make-up artist, and Wayne who reminded him of himself. Aaron stood up for the misunderstood father, Treadway, who prefers animals to humans.

As a conclusion, Alexius relished the synopsis on the back cover; Timmy, the unpredictability and complex characters and the name “Annabel”; Raj had not seen such a writing style; Amit generally liked it, especially the tender portrayal of Wayne as a human being. Aaron gave three reasons why this might be the best book we read this year: (1) the zen-like placid style mirrors the peace of forest and nature; (2) the author is compassionate and this compassion shows in the treatment of characters, even villains, and Aaron thought the world needs this compassion (although, Alexius chimed, the author isn’t compassionate to dogs); (3) the moral of the story: even if we are born a certain way, with our own defects, or encounter obstacles, like Wally, we can still overcome what we are given and make the best out of the situation. Despite adversities, there are little victories in life, and perhaps that is all that matters. 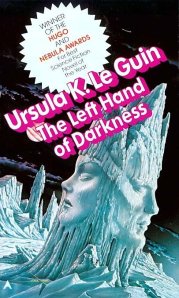 This was a short session, which didn’t do justice to such a complex book, because the festivity of Pink Dot made it difficult to discuss.

It’s a 2-2 vote for the book. Timmy disliked the book because it was overly scientific and ambitious although he is willing to give the book another go; Alex disliked the later part because of the tedious description of the journey. On the other hand, Raj and Aaron loved the book very much. Not his preferred genre, Raj was surprised at how he could relate the book to real life. Aaron liked the complexity, intricacies and the journey of a homophobic to a non-homophobic person.

1. Favorite character: Alex and Aaron both liked the handsomest “man/woman” in the book because he is evil.

2. Sex: Timmy felt that Le Guin seems to be playing god because she dictates the roles of sex in beings.

a. Incest: Both Timmy and Alex felt that the incest isn’t creepy.

c. Mother/Father figure: Timmy thought that a being which can be either a mother or a father questions religion.

d. Estraven-Genly Ai: Do they have sex? Alex didn’t think so; Aaron thought it was suggested, like the camera shifting from a kissing scene into the embers of dying fire. Aaron said that it is reasonable for them to have sex because then they would be connected by soul and body. Timmy said that’s cheesy.

e. Prostitution: Alex brought up that it is interesting that there are bordellos and that part should be explored and would potentially be interesting. Timmy related the bordello to a gay sauna.

f. Sexuality: The sexuality of the beings defies any forms of categorization. They are gay, straight, bisexual, and transgender, all roll into one.

3. War: Do wars exist only because of the aggression in the male sex? The novel is ambiguous.

4. Politics: Aaron thought the “shifgrethor” (saving face and avoiding confrontation) is reminiscent of Singapore’s politics; but Timmy suggested that it is applicable to Asian societies.

5. Style: Alex brought up the style of the novel, claiming that the novel is overly complicated with two narrators, legends, myths, etc. Aaron suggests that this would provide an holistic picture, demonstrating Genly’s flaws.

Other issues not discussed are technology, ecology, post-colonialism, religion, and race.

Before the minutes, Timmy would like me to shout “WE HAD FUN!”

1. Isaac liked the novel best because of the humor and writing but he thought that the narrative is too deterministic in the sense that the characters are determined by their culture, nationality, sex, and gender, although Timmy noted that it may be because the novel is influenced by the structure of Greek tragedies.

2. Timmy was on the fence on this novel although he really liked the minor gay character, Ben. Timmy also pointed out that of the representation of plethora of sexualities in this book.

3. Aaron disliked the novel intensely and wished Yusa were around to defend it. Aaron hated it because:

a. of the homophobia. Aaron understood that the author intends to be liberal but the essentialism—that the hormonally male character has to be straight, instead of bisexual—in the novel is revolting. Besides, the lesbian Aunt Lina is eradicated from the novel, from the family history, once she finds her lover.

b. of the racism that Asians are the “last pit-stop” for closet gay men and how Julie has no options other than Cal. Aaron felt that it is worse being a liberal but possessing the wrong ideas about sexuality and race than being a bigot, especially when the book is a best-selling award winner, read by millions of people.

c. of the writing. The trio liked the part which mimics the language of camera but ambivalent Aaron thought that the author is a sell-out, already directing the film.

d. of the narrative. It seemed to Aaron that the author tries to force the narrative to fit into American history, making the narrative unrealistic. Isaac claimed that fiction doesn’t need to be realistic—true—and Eugenides is trying to write an American epic and so has to go through different eras. Timmy said that because of the scope of the novel, the themes are lightly skimmed over, hence we could hardly talk about the themes.

4. At the end, Isaac felt an emptiness because when he asked us to say something nice about the book, we could only say it’s well-written.