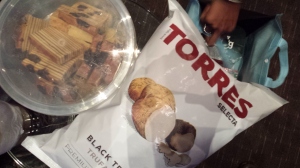 You can watch the entire movie here: 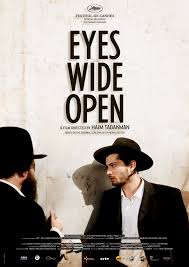 Several of us found part of the movie melodramatic; the stationary, long takes slow; and homosexual relationship is depicted as physical lust, sinful and destructive to everyday life, not emotionally connected. Daniel also noted that despite the story being set in an orthodox Jewish community, the plot is cliché: a boy comes into a man’s family, destroys his way of living, and eventually they break up.

Themes
1. Religion/Sin: In a rather sadist scene where the Rabbi interprets abstinence as sinful, that we should give into our impulses, but Reb Aaron argues that restraint is a challenge god gives us to feel closer to him, Vishakah cleverly called on the catch-22 situation: there is no way you cannot not be a sinner.

a. Violence as fanaticism: The patriarch Rabbi stops the gay bashing of what might have been construed as violence, bordering on fantaticism.

b. Homosexuality and Judaism: Reb Aaron claims that being with Ezri brings him closer to god, making him more alive than he has ever felt. In one sense, homosexuality isn’t incompatible with Judaism because the more alive an individual feels, the closer she or he is to god.

2. Food: Daniel brought up using food as a form of communication. Raj pointed out that, within the limited power a woman has in the orthodox Jewish community, the Wife uses food to punish the Reb Aaron.

3. Water: extensive use of water as motif: spring, rain, burst pipe, etc. Dominic hawk-eyedly observed that the parallels and differences in the two scenes of Reb Aaron at the spring: on the second time, Reb Aaron has changed and comes to accept himself as depicted by his nudity.

4. Love: Victoria expounded that the type of love Reb Aaron has has his self-interest at heart.

5. Gender: Although the interaction of men with women is minimal, and although, as Vishakah pointed out that women have little rights within the community, Raj argued that even within the limited rights, the Wife is a powerful figure, in charge of the household and when they should have sex. The scene where she holds him like in a pieta demonstrates her power. Even her wig, as part of the mise en scene, allows her space to portray her progressiveness and femininity.

2. Music: Victoria observed that both pauses and music create tension and discomfort, especially the music that is eerie at times, almost like a horror movie.

In the end, Dominic drew parallels between the movie and the newly liberated gay men he knows. Victoria and Timmy lauded the realistic and intimate depiction of an orthodox Jewish community. Aaron thought while the ending appears conservative—husband goes back to wife, gay man expelled from community—the movie is in fact subversive, telling the viewers that orthodoxy has but one heteronormative way of life, and doesn’t allow expression of selfhood. You feel for the characters: Sara who marries a man she doesn’t love, the Wife who is stuck in a passionless marriage, Ezri and Reb Aaron who couldn’t feel alive more. Living a life like that is wasted, the film advocates. In this way, the director is very smart, getting funding from Israeli government, and getting away with a subversive message